Home > Features > From the Archives: 18 solutions to boost sales

From the Archives: 18 solutions to boost sales

For most dealers, the market continues to be strong, but that doesn't mean it can't get better. After all, who can't use more sales?

We gathered information from dealers across North America about how they’re increasing sales of boats, engines and more. We’ve organized the tips by different parts of the business, but one thing they all have in common is that they’re helping dealers sell more. These ideas aren’t just theory — they’re all steps that dealers have taken to successfully boost sales.

With the rise of the Internet and decline in boat sales, shows have taken a hit. Most are smaller and dealers usually report fewer deals being made at shows than in the past. They’re still an important part of the sales process, though, as shows give prospective buyers a chance to see and feel the boats – and to get excited about boating in the dead of winter (especially in the Midwest and Northeast).

1.  With the advent of the internet, Kelly’s Port, located on Lake of the Ozarks, found that many of the buyers that come to the shows are just as — if not more — informed on the different makes and models they are interested in.  That prompted the Osage Beach, Mo., dealer to start using “model specialists” at its boat shows, assigning specific boats models to specific salespeople. Whenever a prospect is spending time on a specific boat the respective model specialist jumps on the lead. If a lead is more qualified for another boat they are then taken to the other boat and that model specialist is introduced.

2.  Model specialist assignments are made in the fall to give the individual salespeople time to get to know their specific model of Regal or Bennington boats. That research includes not only getting to know the boats Kelly’s Port carries, but also seeing how the competitive brands sell and learning their strengths and weaknesses.

3.  Traverse Bay Marine opted to go small in its boat show approach. Instead of displaying boats, the Traverse City, Mich.-based dealer rented a 10x10 booth at its local boat show in 2012 and ran its annual in-house boat show the same days and hours of the boat show.

The booth was manned by a salesperson and consisted of a display of pictures of new and used boats. Using an iPad connected to a flat-screen television, the salesperson could show off more products and “build a boat” functions.

“There were many times our little booth had more people at it than other dealers that had six boats on display,” said Traverse Bay CEO Jim Rautio. “We then invited them to visit our showroom only 15 minutes away to see all the brands and models at one stop.” 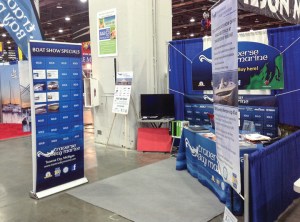 4.  Traverse Bay also offered customers a refund of their boat show admission fee when they visited the showroom. The approach drove people to the showroom, where Traverse Bay could display more than they ever could at the show. The dealership closed nine more units during that time than they had the previous year.

5.  In fact, the booth concept worked so well that Traverse Bay leased a 10x10 booth at the Detroit Boat Show, 250 miles south of the dealership. The exhibit allowed Traverse Bay to reach large number of boaters and boat prospects that have summer homes up north but live in the south Michigan area, and resulted in five units sold, plus marketing exposure.

Read more from the original article.